Atlanta loves putting on big events. Planning permanent infrastructure for the purposes of big events is generally bad idea. However, planning for big events doesn’t have to be big or specific to the event. Rather, big events present an opportunity to think about marginal improvements to our city that benefit residents on a daily basis.

Typically, major events such as the Super Bowl are brought to cities with grand claims about economic benefits to the city. For most, the benefits of major events are non-existent, obtuse, or temporary. For example, some major improvements were made to MARTA operations, including 24 hour service on heavy rail and several bus lines, and shorter headways for rail service. Shorter headways and 24-hour service are great, but that doesn’t do us much good 2 weeks after the fact. However, there are a few improvements that MARTA could make that would be beneficial for visitors, but also for everyday users. We have the NCAA Final Four coming Downtown next year. It's time to start thinking about a few improvements to the system that can be completed in the short term. I’ll suggest a few improvements that could be made in a relatively small amount of time below.

Finding your way around transit stations, especially as a visitor, can be daunting. Some MARTA stations are relatively small and easy to navigate. Others are not. Five Points has plenty of signage noting where to access, but sometimes that can lead to more confusion. At least once a month I get off the train with the intention of hopping off the bus, walk towards the Peachtree exit, and then embarrassingly turn around a few seconds later to walk to Alabama.

Wayfinding can be more than just signs. One means of doing this is by using the floor. Train stations in England, Japan, and Europe all do this in one way or another. Colors can designate different lines are areas as in the first image from Victoria Station in London. One of the best parts about this sort of wayfinding is that it can be useful for blind persons if designed correctly (see second and third images from Nagoya and Vienna, respectively). Plus, this sort of wayfinding can add some character and color to stations with an ounce of creativity. Imagine an amalgam of red/gold and blue/green lines leading customers from fare gates to platforms, and numbered lines that lead to bus bays. 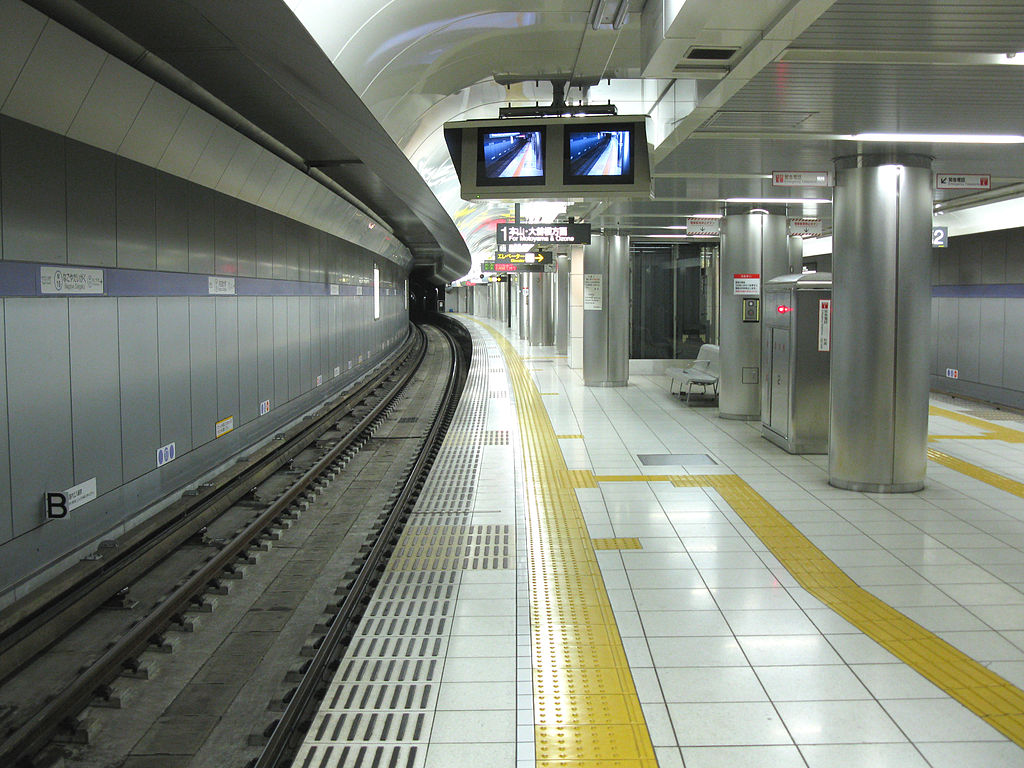 This sort of improvement might seem trivial but it’s important. Transit agencies need to do their best to make their stations and systems quick and easy to navigate. This is the case for visitors and locals alike. I'd love to see some thinking from MARTA on this before the upcoming Final Four and World Cup.

This would be useful for several reasons, and particularly for visitors. If you’ve ever taken the train to the Louvre, you know exactly what I mean. Just looking out the window suggests you're in the right place. There are works from the Louvre on display right on the platform.

Now, we don’t need the Louvre inside MARTA stations, but it would be nice if our platforms had more character and reflected the neighborhoods they call home. Some other great examples are Amherst Street Station in Buffalo (below left), and the Grote Markt Station in the Hague (below right). It's difficult to tell from this photo, but the floor of this station in the Hague is decorated with an old map of the Hague. There are also artifacts that were discovered when excavating the station.

Distinctive stations are useful for tourists who may not hear the overhead announcement or see station signs (imagine images of Civil Rights heroes inside King Memorial station). Transit stations are public places. We should celebrate them.

A good, easy-to-read map is difficult to create. Conveying information quickly and succinctly is difficult in any media and that is true for maps as well. For what it's worth, the MARTA Heavy Rail map is pretty good. It's been maligned for including 285 in the map, but the fact of the matter is that the Perimeter is a simple means of describing right where you are in the City of Atlanta. So how can we improve it? Throw the high frequency bus routes on there (h/t to Carl Holt for also pushing this idea). Carl suggested that MARTA add those routes that operate at the same headways as rail service. This is a very cool idea. Those routes are the 39, 71, 78, and the 102/2. While most tourists may not ride the bus, it can't hurt to give them a nudge in the right direction. Events are a good time to beta test new ideas. Plus, the 71, 78, and 102/2 also happen to be funded in the MORE MARTA plan as Arterial Rapid Transit lines. Why not start familiarizing people with these soon-to-be-improved lines by including them in maps?

Currently MARTA, the Streetcar, GRTA, CCT, GCT all accept the BreezeCard but are on different fare systems. Getting a unified regional fare system would be excellent, but will likely take many, many years. However, there is one major change that shouldn't take long: free transfers between MARTA bus/rail and the Streetcar. As it stands, the Streetcar costs an extra $1 regardless of whether one is transferring from another MARTA ride. This is completely bonkers. Most of the utility of the Streetcar comes from taking a trip from other points in the MARTA system, and transferring onto the Streetcar to get to areas that otherwise have poor service. For example, if you live near Midtown MARTA Station and want to play some Streetfighter at Joystick, you can ride heavy rail to Peachtree Center, and transfer to the Streetcar. The trip would take about 20 minutes. That’s comparable to the trip time in a vehicle in traffic. Streetcar trips that don't involve a transfer to the larger MARTA network have travel times the same as, or worse, than walking. MARTA shouldn't charge an extra $1 for trips that actually make sense.

We all know about that bridge. The City spent an inordinate amount of money to build it, and justified the expense by stating that it needed to be finished in time for the Super Bowl. It was kind of open. Want to know what wasn’t open? The Inman Park entrance to the Inman Park/Reynoldstown station, and it remains closed today. We were able to rebuild a highway interchange in 4 weeks, but can’t repair a transit station in 5 months? Come on. We need to demand that our city treats it’s transit riders better. The infamous pedestrian bridge is used almost exclusively for special events. Half a MARTA station is closed. People rely on it every day. Why wasn't it a priority to get that done?

MARTA is a critical asset for the city, region, and state. With the Final Four coming up next year, it's time to start thinking about modest improvements to MARTA that last longer than a weekend.

Have other ideas or opinions? Send me an email at davidederer@gatech.edu or find me on Twitter. I'd love to hear what you think.

All photos were sourced from the Wikimedia Commons.

Marginal Improvements for the Centennial Park Drive and Portman Intersection